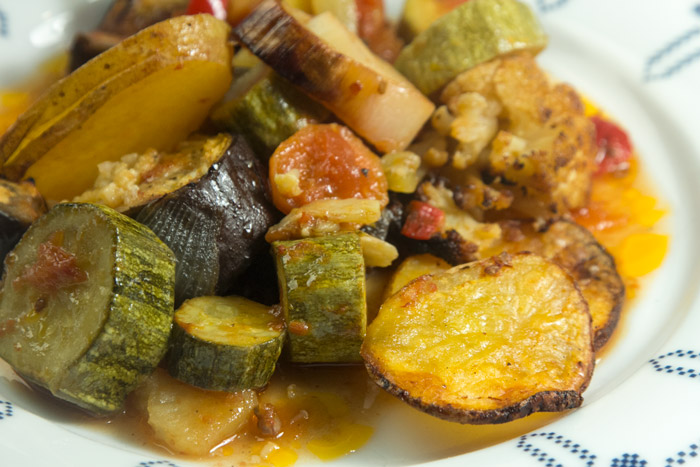 Briam (or Briami or Turlu) is a joyous celebration of the vegetables of Mediterranean cuisine. The name Briam most probably comes  from the Turkish word biryam which means roasted food but its roots are from the Persian biryan which denotes a roasted food with rice. While versions of roasted vegetables dishes in olive oil exist in most Mediterranean countries; the most famous being the French ratatouille,  in Greece Briam   is considered a summer dish, as it traditionally used only vegetables in season during those months. The basic dish is a medley of vegetables in which courgettes, aubergine and potatoes have the leading role and are roasted or simmered in olive oil.

Whenever I put my key in the lock, open the door, and am greeted by a wonderfully rich, warm, mouth-watering aroma emanating from the kitchen, I know Dimitri has been making Briam, says Sophie. It really is the smell of home. You feel that everything is alright with the world when it smells like this!

Here at Caruso, we have always felt that Greece has never really exploited the full gastronomic potential of Briam and has rather underestimated it. When you come across the dish in tavernas, the result is generally tasty but comprises overcooked, mushy veg in an indeterminate over-oily sauce where texture and taste is indistinguishable and the tomato is often overpowering.  We felt this was a prime example of how we could contemporise this dish, using research and helped by scientific knowledge. 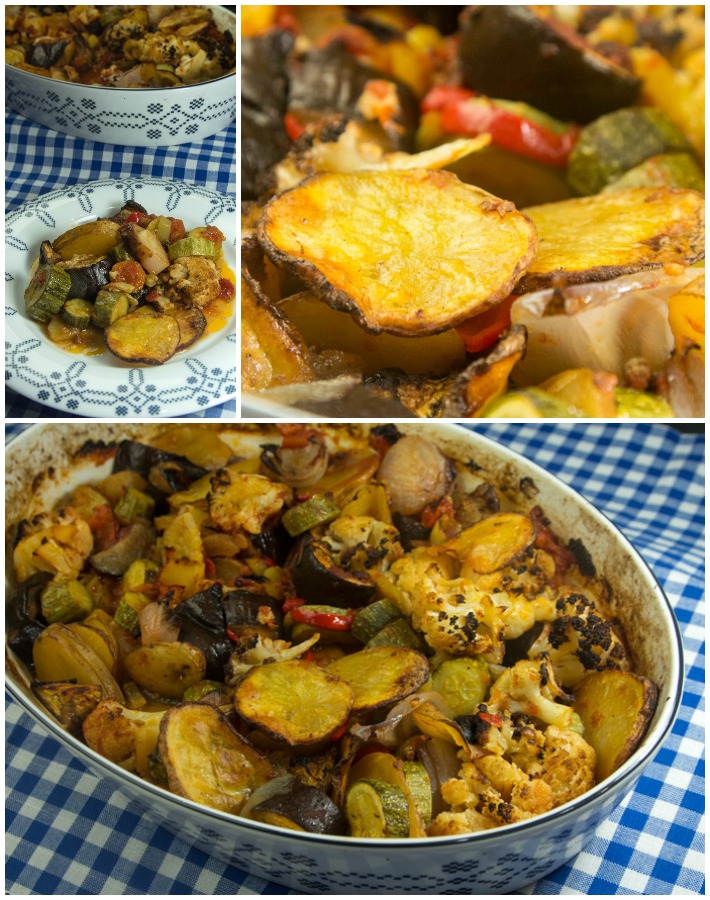 Our goal was to use vegetables from all seasons in order to make our Briam a dish to be enjoyed all year round. Most importantly we wanted to ensure that all the texture and taste of every veggie would be experienced with every single mouthful!

How did we make a better Briam?

Half the game to get firm, tasty vegetables into my Briam is done BEFORE cooking and has to do with the size that each vegetable should be cut into separately, so that they don’t over-cook. 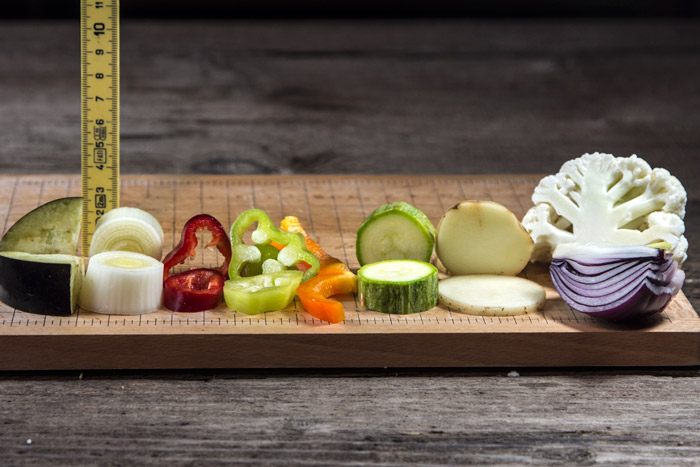 Those that tend to soften and dissolve during cooking should be cut into large pieces – ie. aubergines, courgettes and onions, and those that are harder, such as carrots and potatoes, need to be cut into thinner pieces,. The tomatoes, celery and peppers also need to be cut into small pieces as we want them to meld into the sauce. So, the final dish will have vegetables which retain their texture and taste.

It’s that simple but it makes a huge difference in the end, especially in conjunction with the next secret # 2.

I substitute white wine instead of the traditional addition of water as the liquid for our veg to simmer in. I do not add any water at all to the pan – only white wine and olive oil.

“Why?” you wonder.
The reason is not so much the taste of wine, but because I want the final texture, taste and nutritional value of each vegetable to be preserved individually and  appreciated within each bite. 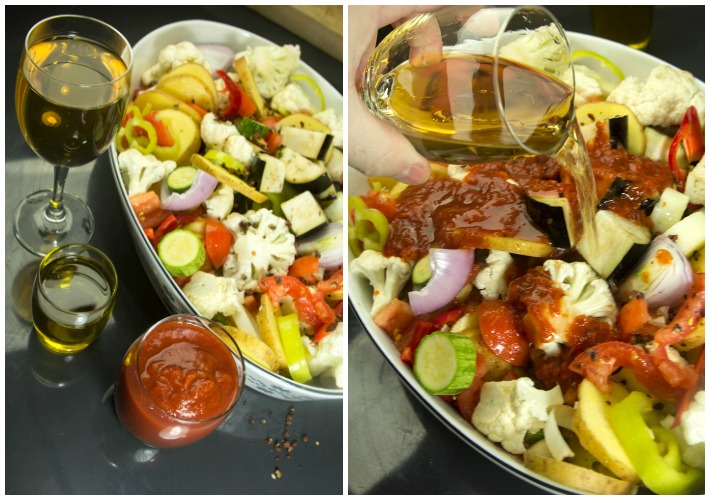 Vegetable cells contain vacuoles filled with liquid. These contain most of the flavour and nutritional value of the vegetable. This is also where most of the water is inside the vegetable, which exerts pressure outwards, enabling the vegetable to retain its shape.

In Briam, the  water in the potatoes can be as much as 79% of their weight, or 95% of the courgettes and celery. The liquid inside the vacuoles is slightly acidic. Therefore, if we use water, which is slightly alkaline for the vegetables to cook in – once the temperature reaches 60ºC, the osmosis effect will draw the liquid out of the vegetables and thus they will lose both their shape and their flavour which will simply transfer to the sauce. Therefore, if we use white wine instead, which is acidic, we will have minimal loss of liquid – and so all the flavour and texture will remain, and not be lost in the sauce.

Extending the range of vegetables in a Briam  (apart from the classic potato, aubergine, courgette, onion and tomato) by adding carrots, leeks and cauliflower creates additional contrasting flavours and textures that really take the dish to a whole new level, and also means you can enjoy this wonderful dish from January til December! A final touch of spice in the form of chilli flakes and/or Szechuan pepper seeds is all my Briam needs to send it into the stratosphere of flavour! 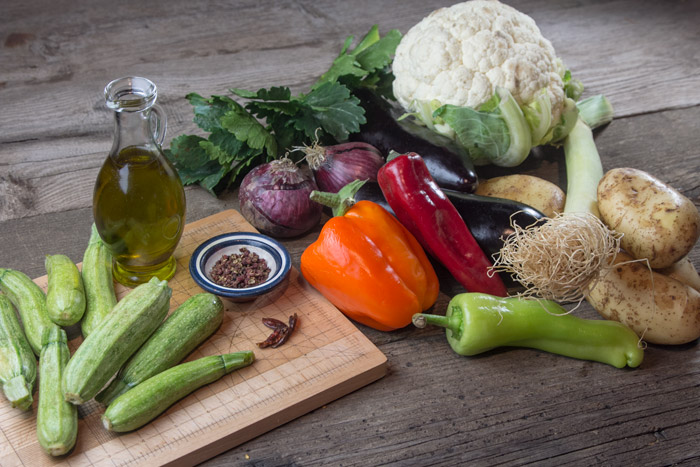 The result is that our contemporary Briam recipe has been embraced by Greeks, reaching the top position in Google and getting a significant number of positive comments. 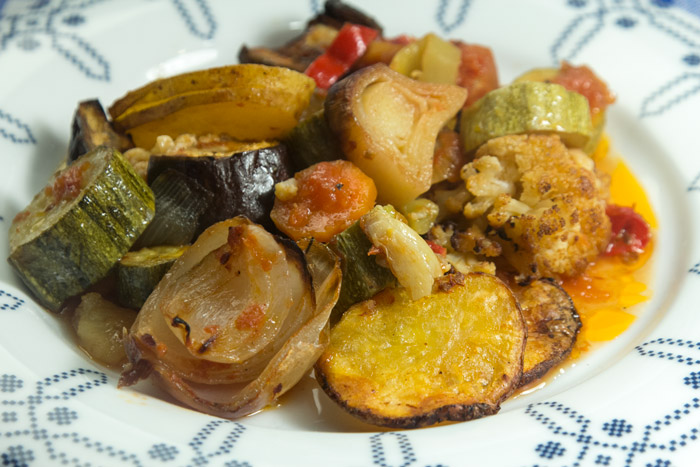 This is a simple, tasty and healthy dish, ideal to cook a couple of times a month. It requires just 10 minutes of preparation and 2 hours in the oven. You can play about with it, adding your own ideas or changing certain ingredients, but I urge you to try it just as it is in the recipe at least once.

2. Wash all the vegetables and one by one cut them into the appropriate size, as follows: 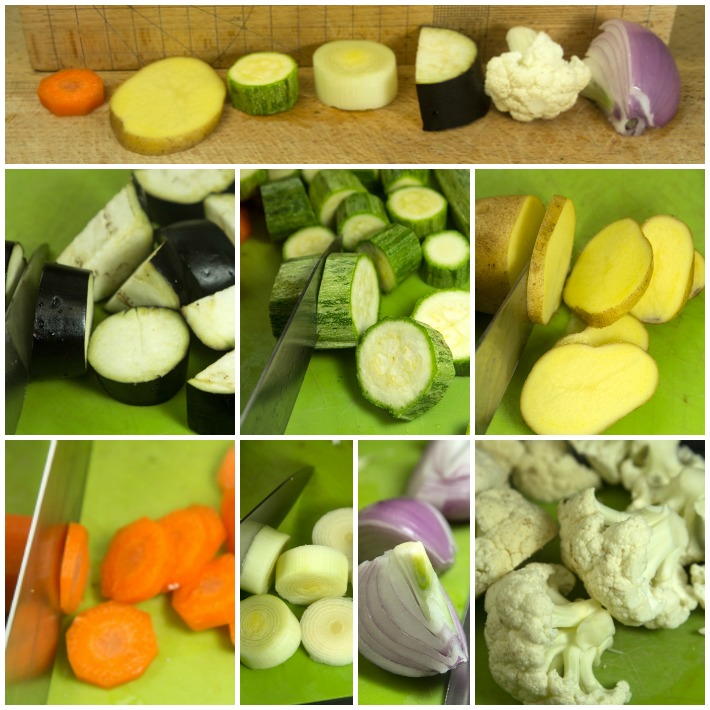 3. Mix the cut vegetables in a roasting pan. Add the tomato sauce, Szechuan pepper, sugar, olive oil and wine, salt and pepper and stir again. Place the pan in the oven on a medium shelf. 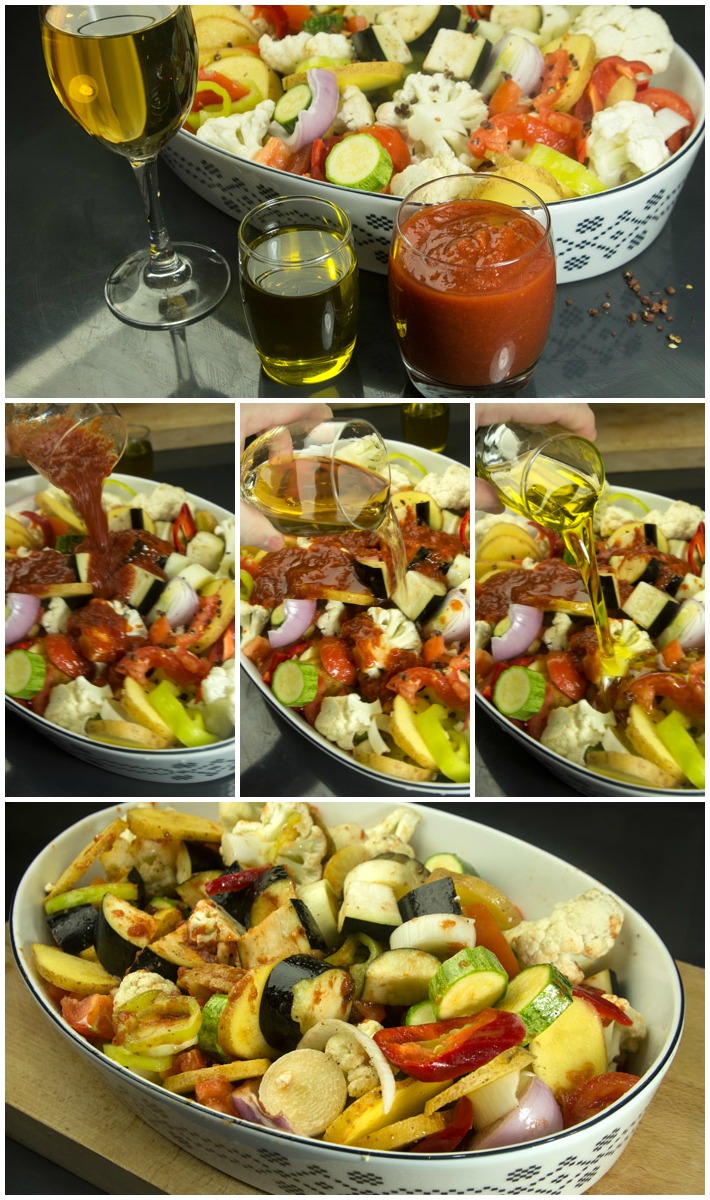 4. After 1 hour, stir the ingredients again and then every 20 minutes, until the potatoes begin to brown on their edges, which will be after a total of about 2 hours, depending on the oven. If you want the vegetables to be crispier, put them under a hot grill for 5 minutes and then remove the pan from the oven and leave it to cool for at least 15 minutes before serving. 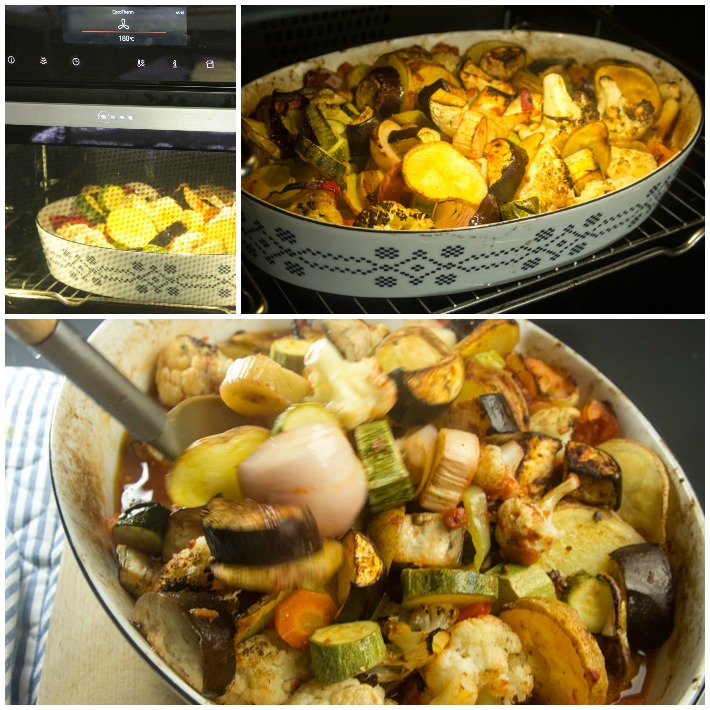 Take the roasting pan to the table and serve from there, because nobody ever ate just one helping! It should be accompanied by good quality feta cheese, delicious bread and ideally with a cool rosé wine, because you will  feel as though you can glimpse the Mediterranean. 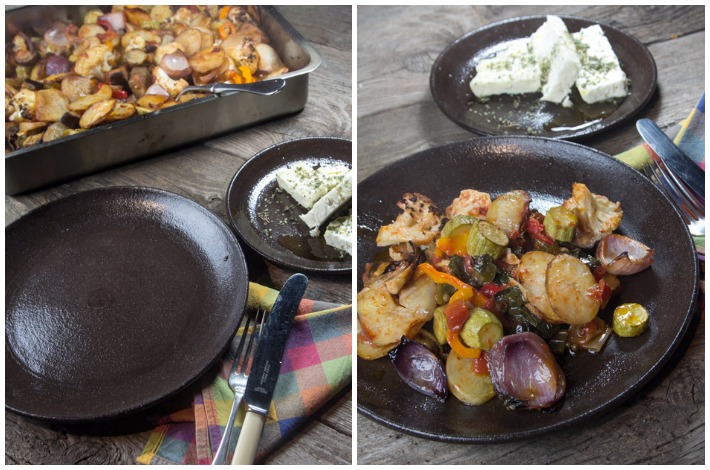 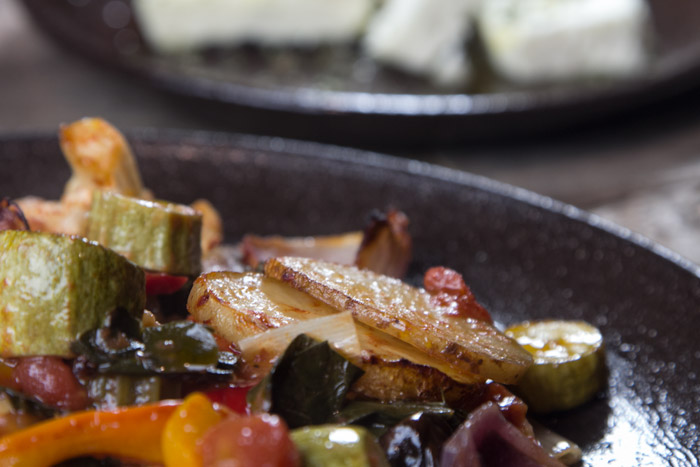