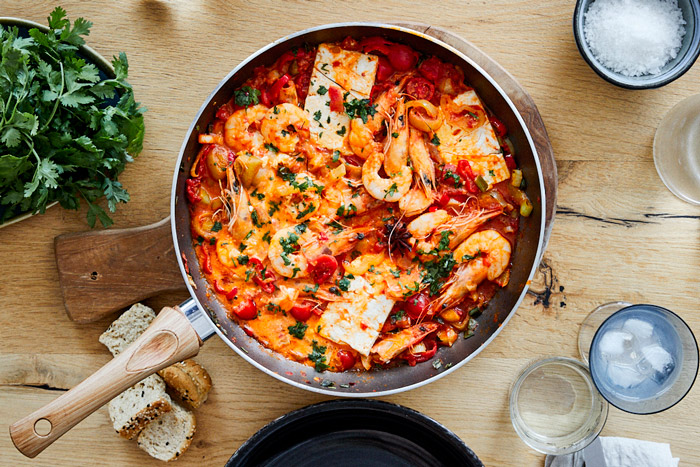 This prawn saganaki recipe is the Aegean islands on a plate! It combines perfectly-cooked juicy prawns on a bed of sweet vegetables with feta and ouzo giving it the unmistakable taste of Greek summer. I serve it as an appetizer to all our foreign visitors to introduce them to the magic of modern Greek cuisine. 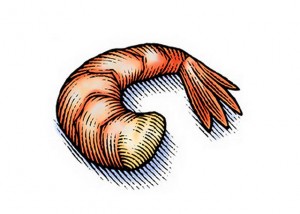 Prawn saganaki is classic Greek meze at its best, as it uses our national cheese – feta – with our national drink, ouzo, in combination with tomato, in order to praise the noble prawn!

Saganaki is named after the frying pan in which it is traditionally prepared, a diminutive of sagani which is a frying pan with two handles.

The making of my perfect prawn saganaki has three strict gastronomic conditions: the prawns must be tender when cooked, the feta must not have melted right into the sauce and the sauce itself must have a fine balance of flavour with a touch of spiciness. 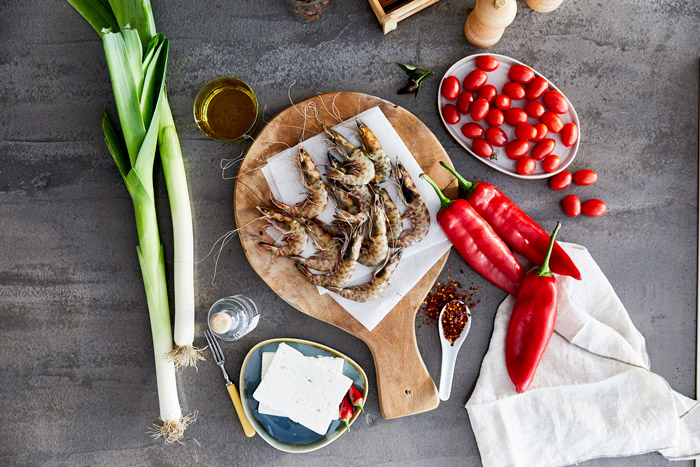 The first two conditions are largely a matter of technique and the emphasis is on the speed of each step. The third is mostly an issue of choosing combinations of ingredients and herbs. My own recipe relies on the combination of the sweetness of the caramelised leeks with the intense colours of three types of pepper, one of which is hot, adding the spicy dimension to the flavour of the dish and encouraging the thirst for an accompanying drink, as every proper meze requires! And for its aromatic composition, ouzo and star anise have been used in order to enhance the Greekness of the dish, along with fresh coriander at the end, giving the dish a unique identity.

Note: this is one of seven recipes, which have been selected by Neff, the top kitchen appliance brand, to be promoted to all countries of the world via their social media. I am extremely proud to have this opportunity to promote modern Greek cuisine to a very sophisticated international audience in this way. For this project, I was photographed and videoed making my prawn saganaki by Neff’s official photographer, Katharina Bohm (http://www.katharinabohm.de/) from Berlin, so the photos you see in this article are her own, as well as the video.

This recipe is simple and quick and is a perfect starter before a fish or meat main course, as well as being the ideal meze for a glass of ouzo or an ice-cold Weiss beer. The best thing about it is dunking your bread in the feta cheesy, spicy, tomatoey sauce. Mmmm …

It takes 20 minutes to shell the prawns and another 20 minutes to prepare the rest of the ingredients and for the cooking.
One useful tip to remember is the keeping of the heads of the prawns to add flavour to the sauce. The main challenge is not to let the feta melt and not to overcook the prawns. Don’t forget that even after removing the saganaki from the heat, the prawns will continue to cook for another two minutes due to the temperature of the sauce. 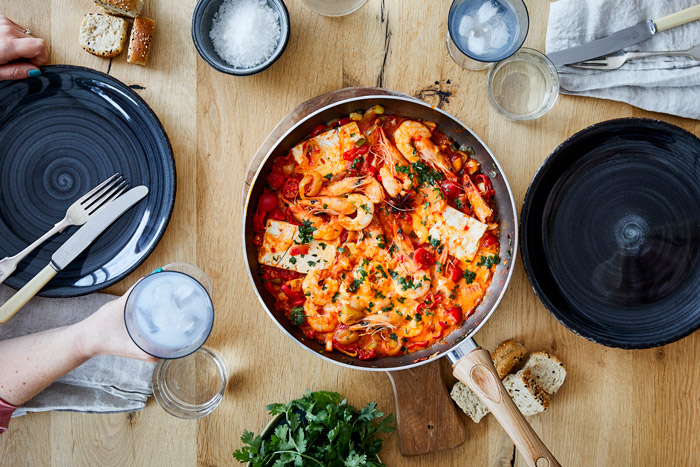 The dish can be made in two stages: you can prepare the sauce up to the stage where the feta goes in and then later when you’re ready to eat, simply reheat the sauce again and add the prawns. However, it is best to do it all at the same time before serving.

1. Preparing the prawns
Shell and de-gut the prawns, keeping half of the heads to one side and marinating the rest in 40ml of the ouzo. 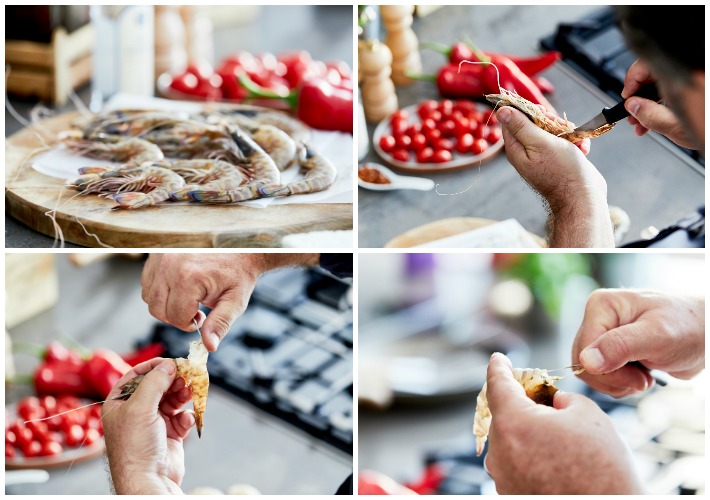 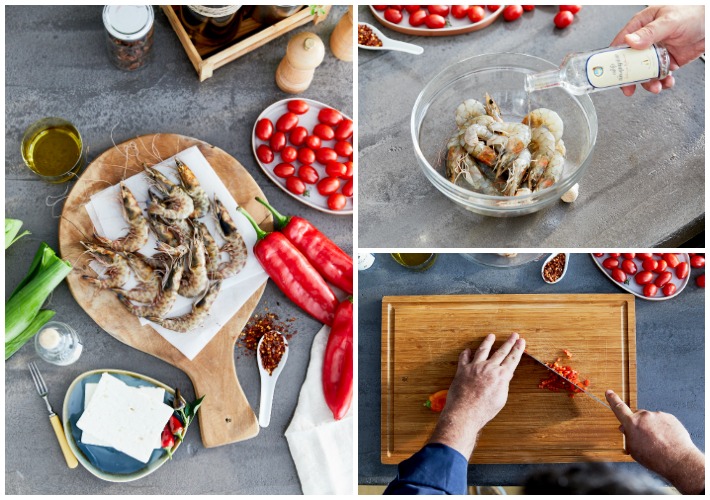 2. Sauté the vegetables
Heat the olive oil in a wide pan on a low-medium heat and add the leeks, spring onions, peppers, chili flakes, star anise. Sauté for 2 minutes and then add the prawn heads and leave to simmer for about 10 minutes or until the vegetables have softened and sweetened. 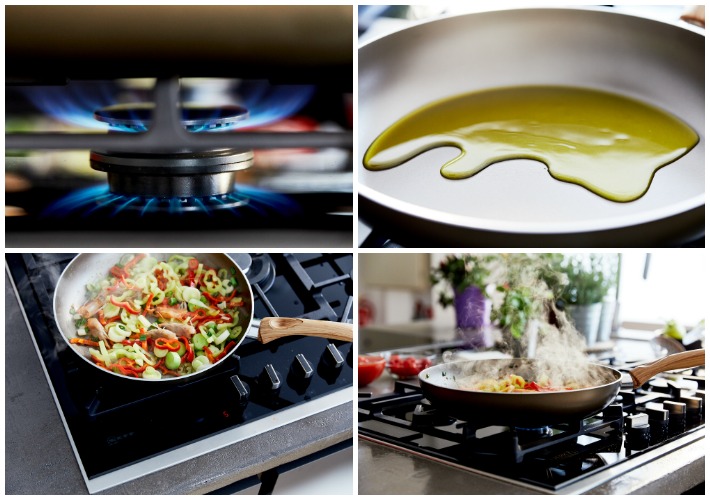 3. Add the tomatoes
Tip the chopped tomatoes and mini pommodori or cherry tomatoes into the pan and simmer until the liquid has reduced (about 5 minutes). 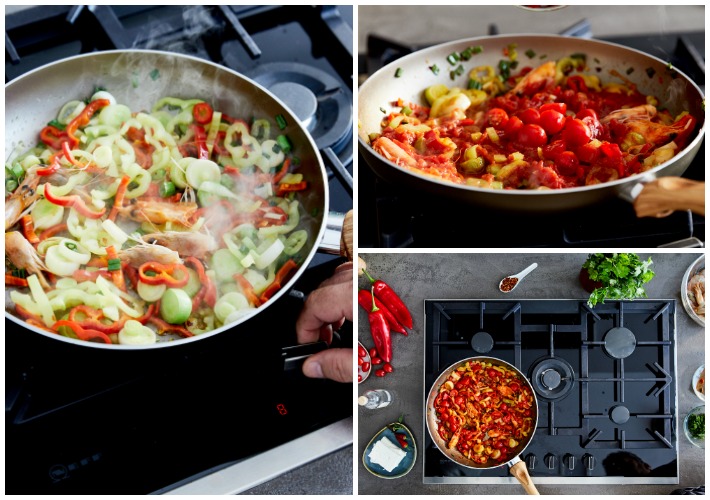 4. Time for the feta
Add the slices of feta, turning them over after about 2 minutes before they start melting. 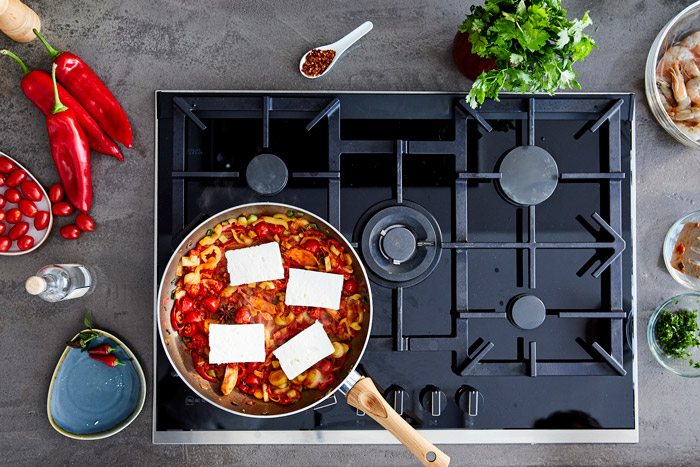 5. Last step of prawns and ouzo
Once the feta slices have been turned over, add all the prawns with their ouzo marinade and cook for 2 minutes on the first side, turn over, leave to simmer for 1 minute and then pour in the rest of the ouzo. You can flambé the pan at this point if you like. Then, remove from the heat, sprinkle the chopped fresh coriander leaves over and season sparingly. 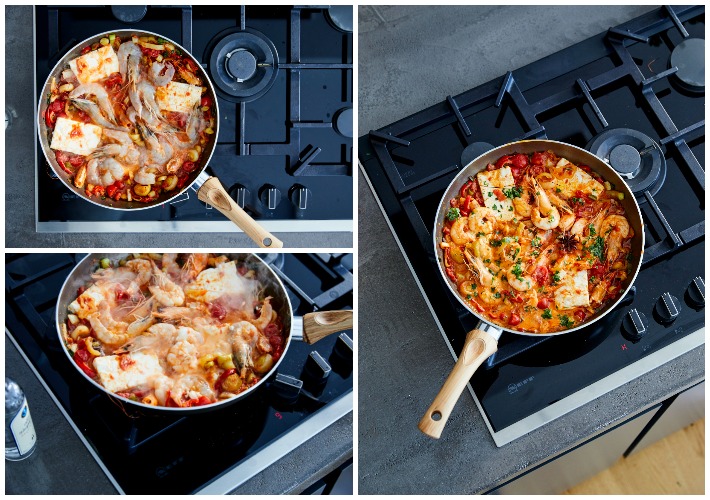 Serve as a starter or light lunch; perfect with a glass of ouzo, chilled white wine or an ice-cold Weiss beer. 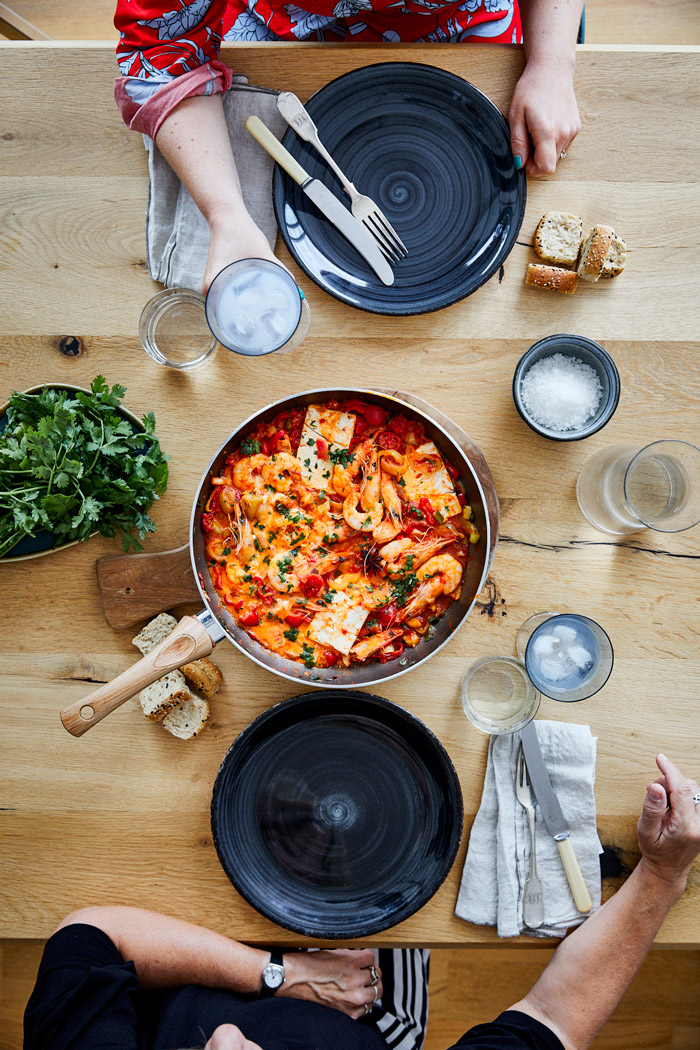 Peas with onion and dill, cooked in olive oil is a characteristic example of how a simple, but carefully chosen…