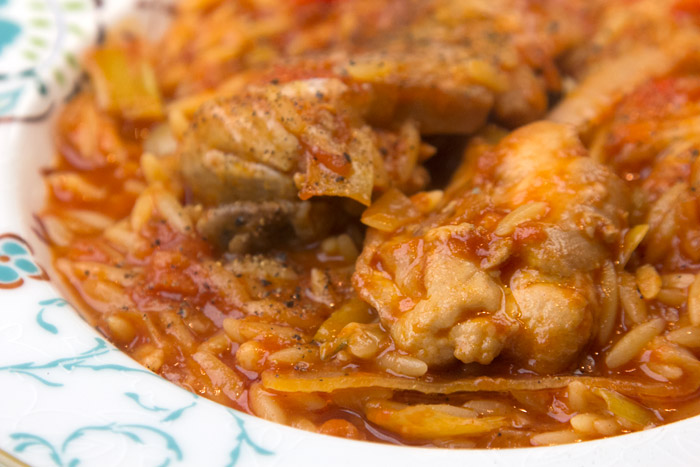 Youvetsi is perhaps the epitome of Greek comfort food. It’s a dish I cook a lot and I almost always serve it when I have guests from abroad who want to taste something typically homemade and Greek. I have even made it abroad for family and friends who asked me to cook Greek food for them. I cooked them a Chicken Youvetsi that had them asking for more! 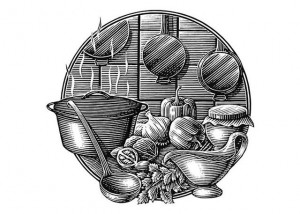 The original traditional version is for lamb or goat, baked with orzo pasta in a special earthenware dish known as a Youvetsi. However, this recipe has evolved and now chicken is often used as an alternative, and even fish in some places.

While I love Youvetsi, I rarely order it in restaurants or tavernas because it is generally pre-cooked and re-heated, thereby causing the orzo to be overcooked and sloppy, and the sauce to have dried up. I have perfected my recipe for Chicken Youvetsi after years of fine-tuning how I make it, and one of the major tips is that it should be served no more than 15 minutes after leaving the oven. When it comes out of the oven it will still have some extra juice, but by the time it is served at the table you’ll see that it has already been absorbed by the orzo. If it sits for too long or is reheated, half of its magic is lost! 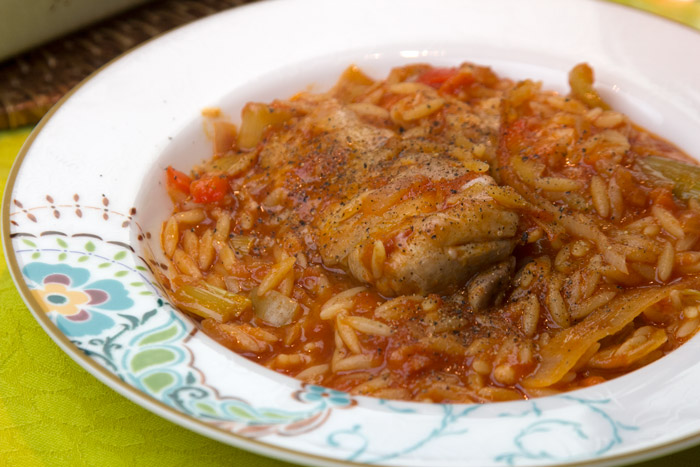 For me Youvetsi is a delicious, comforting dish full of warmth and emotion. Whether meat or chicken, it is enveloped in the sweet tomatoey luxuriousness of the orzo and topped with  melted cheese. Altogether it whispers one word to me – home.

I particularly love Youvetsi with chicken for three reasons. Firstly it makes a rather rich traditional food much lighter. The second reason is that it’s very quick to make and the third, is that children love it! In the last two months alone, I have served this Chicken Youvetsi to over 30 people, most of whom have asked me for the recipe. So it’s time to share it publicly, because it’s simple, delicious and suits all occasions – from everyday suppers to dinner parties!

Chicken Youvetsi is an easy recipe that will take a total of 1 hour and 10 minutes including all the preparations. In theory, you could make the whole dish in a large saucepan, but if it isn’t made in an oven, it doesn’t strictly count as a ‘youvetsi’, it is just orzo!
Traditionally youvetsi is cooked and served in a special ceramic or earthenware ‘youvetsi’ pot, but if you don’t have such a thing, a casserole dish (preferably earthenware) will do just fine! 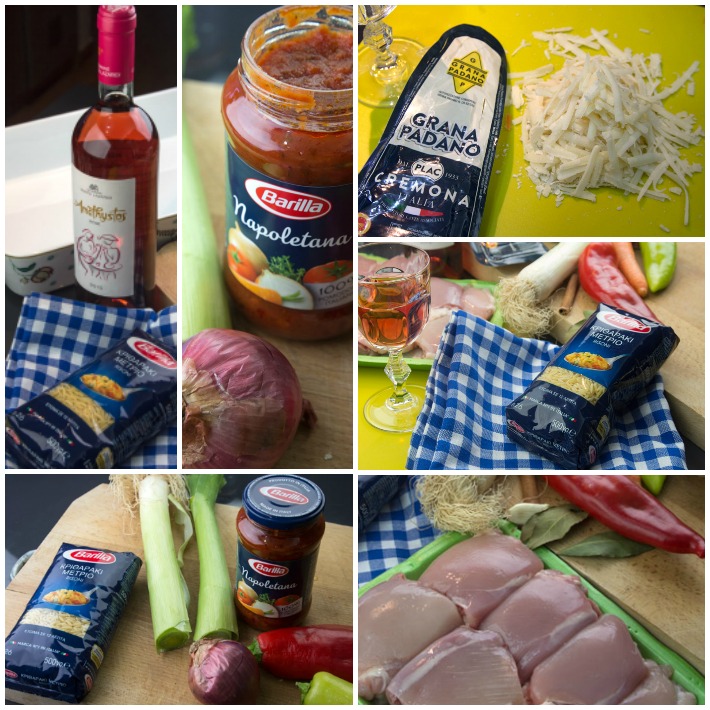 1. Get all the ingredients ready and grate the carrot, finely chop the onion, slice the peppers and leek and coarsely grate the Grana Padano. You can also open up the wine and take a sip to make your cooking have an extra zing! 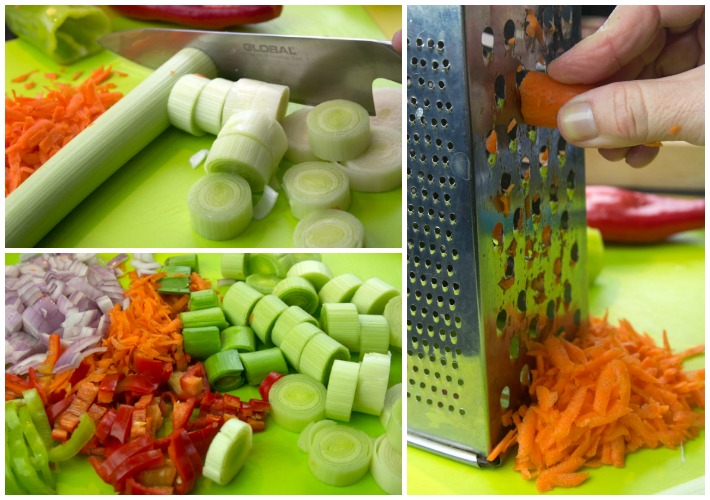 2. Pour the olive oil into a wide-bottomed pan on a high heat. Once the oil is hot, carefully place the chicken thigh fillets into the pan and sauté them from both sides until they brown, which will intensify their flavour. It will take about 4 minutes to finish sautéing, after which, take out the chicken pieces and put them into a bowl. Lower the heat to around medium or 4 (on a 9 scale hob). 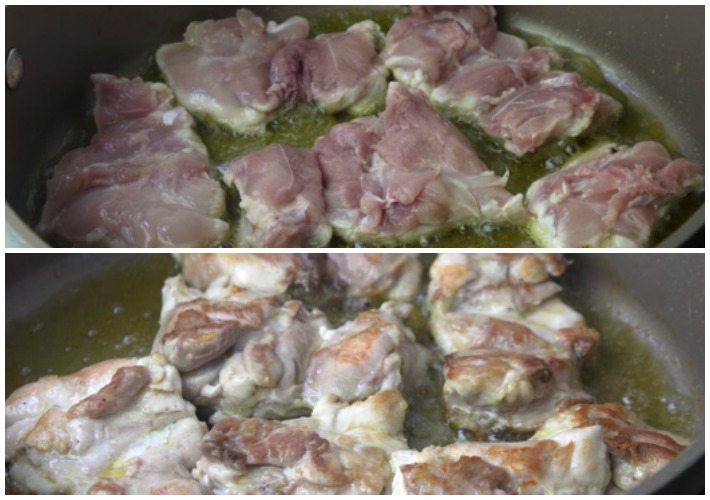 3. After the oil temperature has cooled slightly, tip the cut vegetables (onion, leek, peppers, carrot) into your saucepan to sauté on a low heat. The low heat gives them time for all their delicious sweetness to develop over the next 10 minutes. As soon as they start to soften, add the bay leaves, cinnamon, garlic and rosemary, and stir thoroughly. 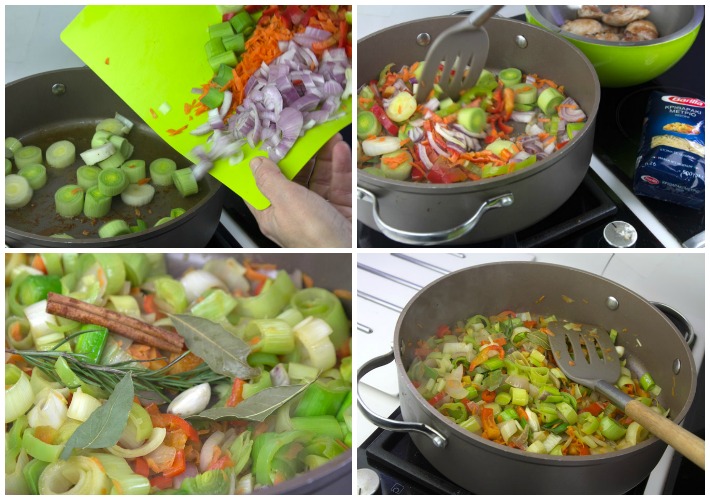 At this point, turn on the oven to 180ºC to preheat and put the ‘youvetsi’ pot or casserole inside so that it will absorb the heat before the food is put into it. Only if the pot is preheated will it bake the contents properly, according to the times we give. 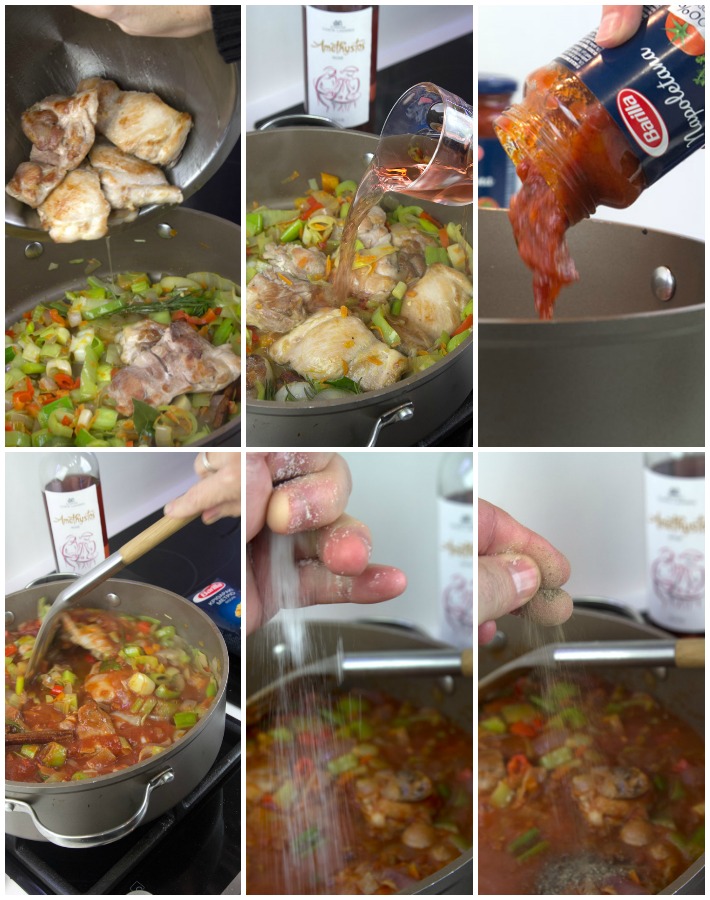 4. After the 10 minutes during which the vegetables have created the basis of the final flavour of the dish, add the sautéed chicken fillets, keeping the heat at medium. Next, I’m afraid you’re going to have to sacrifice some of the wine for the greater good, in order to give its flavours to the sauce, so pour it in!
After two minutes, when most of the wine will have evaporated, it’s time to add the chopped tomatoes.
Stir, add salt and pepper and wait about 10 minutes for the sauce to reduce and for the chicken to cook through without becoming dry. 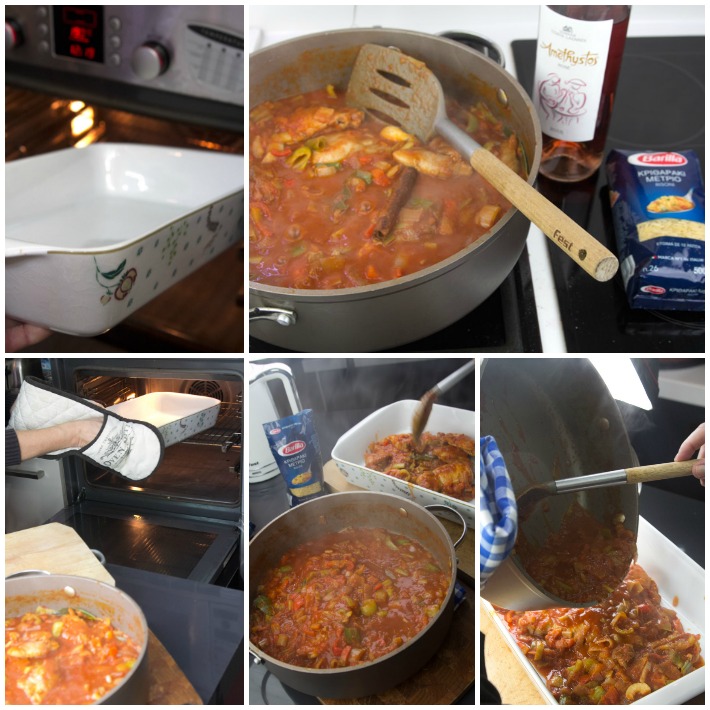 6. Add the orzo to the pot, add 2.5 times boiled hot water in proportion to the amount of orzo, stir the contents carefully and place the dish in the oven for 17-18 minutes. 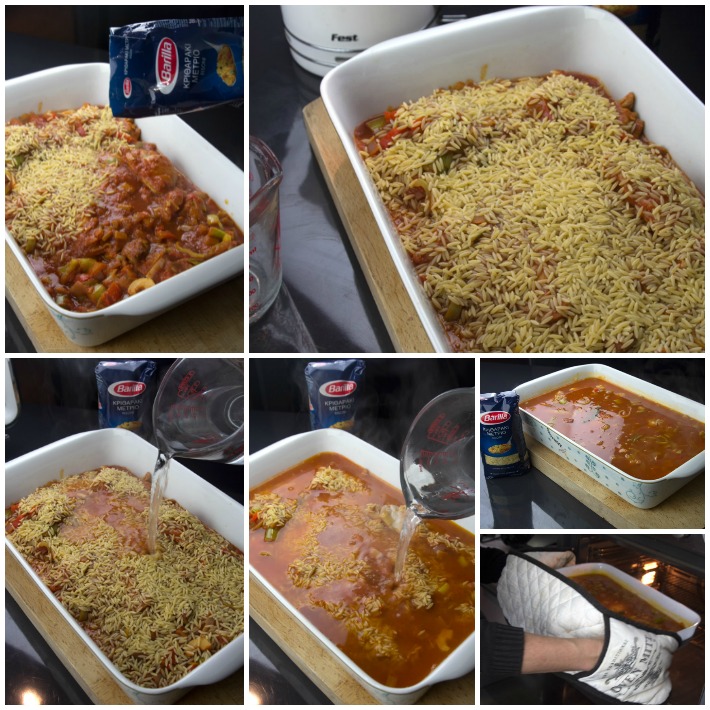 7. After 17-18 minutes, remove the youvetsi from the oven for just long enough to sprinkle the grated Grana Padano over the top and put it back in the oven to complete the cooking. You want the cheese to have melted and almost all the liquid to have been absorbed in the next 5 minutes. 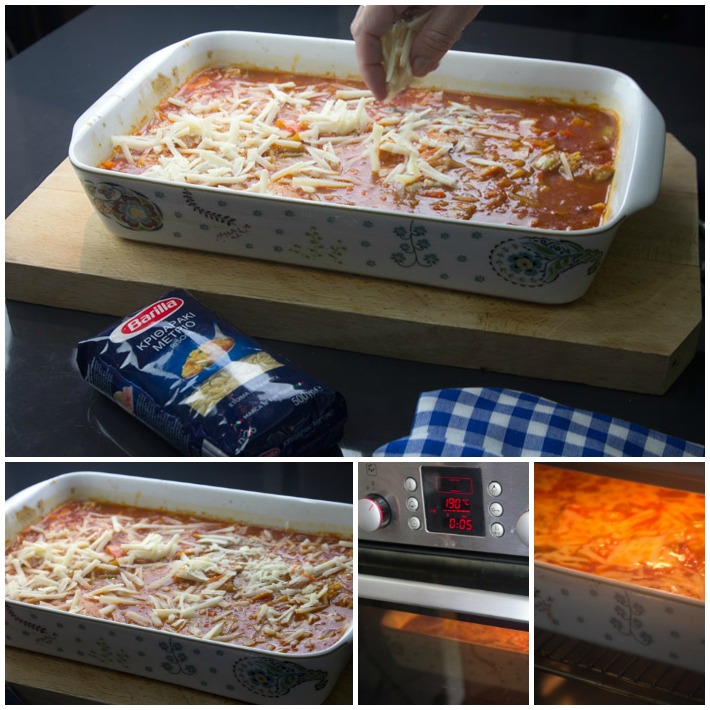 8. After 23-25 minutes total time in the oven from the start, the youvetsi is ready. You must take it out even if it seems to be too runny because the liquid will be absorbed in the 10 minutes it will take by the time it’s cool enough to eat at the table. Do however do a quick test to check that the orzo is slightly al dente but creamy in texture as well. 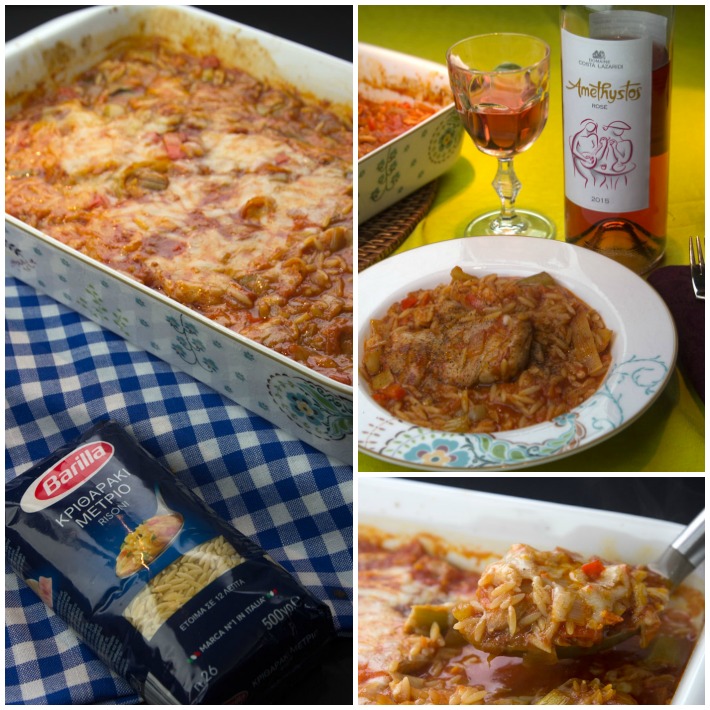 With this method, the orzo will be perfect after ten minutes of rest. So when you try it, it should have the ultimate balance of the centre of the ouzo having a little ‘bite’ to it and a softer outside.

Serve in the dish with plenty of freshly ground black pepper. Accompanied by the rosé wine with which you cooked it. A mild, dry rosé from Cabernet Sauvignon & Merlot would be perfect. Particularly aromatic, it is made to accompany Mediterranean light dishes with chicken, pasta and vegetables such as chicken youvetsi, regardless of the season! 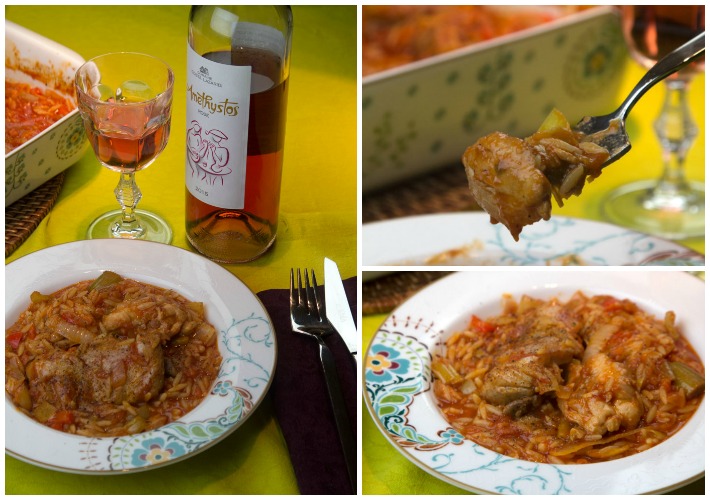